March 15, 2019: Choirs Are Horrible is available again (at least, until it sells out again. Get 'em while they're hot)

While our choir, Dolce Canto, traveled about Western Montana during a snowy week in December, we played a new game, Choirs are Horrible on the tour bus. We laughed, we guffawed, and we snarked as only choirs can.

Because it is such a funny game - a riff on the popular "Cards Against Humanity" game - I posted a picture of one of the card combinations on our Facebook page ( here - "like" our page while you are at it!) and then ...... we WENT VIRAL!!! Omg! Over 16k shares, and more than 2.5 million (!!) people saw that photo. It was even re-posted by Eric Whitaker (swoon).

Our friends, Ryan Guth (the ChoirNinja!) and Stevie Berryman (of StevieBeMusic) invented and printed the first, limited edition, of the game, and it sold out almost immediately just before Thanksgiving. Stevie has also created Crimes Against Handbells if you are a ringer. However, the overwhelming response to our FaceBook post has led us all to work on getting Choirs are Horrible reprinted and available for all of you choir-nerds out there :-)

Stevie is working out the contract with the printer, and we have set up a page on our site to take orders for the game. It's Here! You can order Choirs Are Horrible again!

Also: There was so much discussion about the apostrophe in the wrong place! (We edited it out of this picture!) Yes, there was an error that wasn't caught in that first print run - it was still funny, but please know that there will be no errant apostrophes in the next print run. None's the word. <snark!>

Imagine opening this game on the choir bus...... or after rehearsal..... or at retreat....... or in a sectional....... or backstage at Carnegie Hall!! Send your photos of the best card-combos to: cards@mymusicfolders.com and we'll add the best to a gallery on this page. 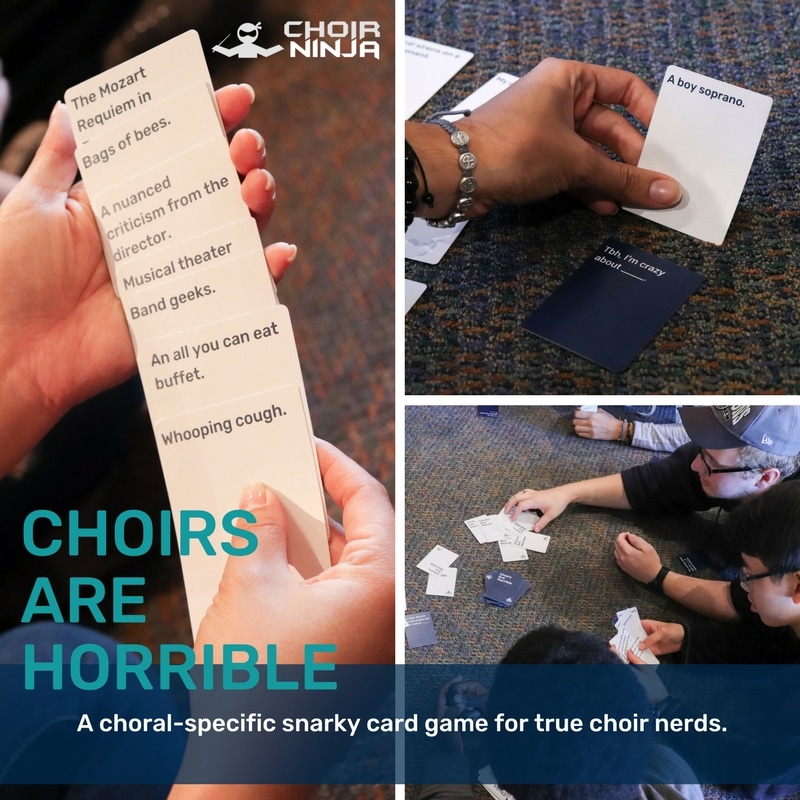